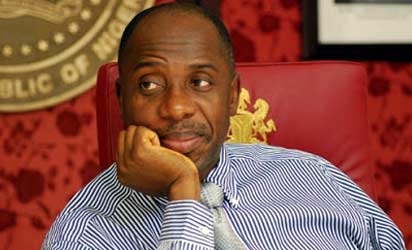 Amaechi stated this Tuesday during the Book launch on the Biography of late Foreign Affairs Minister, Mathew Mbu, titled “Dignity In Service”.‎

Speaking at the function when called upon to lunch the book, the Minister said “since everyone is revealing salaries, it is better I reveal mine. As a minister, I earn N960, 000.00 every month. This includes N360, 000. 00 for rent and I have to pay my aides from the remaining balance.”

‎Recall that the Senator representing Kaduna Central Senatorial District in the National Assembly, ‎Shehu Sani‎ recently revealed that he and his colleagues receive N13.5 million monthly as running cost.

Also speaking on the character of the author, Senator Matthew Mbu Jr. challenged Nigerians to elect good people into power noting that it is the only way the country will achieve desired results.

The Senator while tasking Nigerians to reflect on what Nigeria used to be, lamented that present public office holders and politicians prefer to serve their interest over the interest of the country.‎‎

Commenting on the state of the country, he said: “I served as a Senator and when and if given opportunity, I will serve but I am sorry to say it but Nigerians of today don’t go after those who are actually committed despite the fact that we have them.

“Good stuffs don’t make noise and we Nigerians love noise makers; so much of it. If you make noise in Nigeria, you will make news but in other countries, they call you an empty barrel but in Nigeria, you are celebrated”, he said.

Also speaking, Reverend Father Kekong Bisong said the achievement of the former envoy is a lesson to younger generation.

According to him: “Amb. Mbu served this country with dignity and his achievement is a lesson to those who are called to public service. To serve with dignity is desirable and it is possible and when you do that, you will legacy behind. He was incorruptible. It is still a possibility to transmit this to the younger generation.

“We are celebrating him today because of his integrity. It is important for us to realize that one day will be the end and how will you be remembered?