Nigerian born forward Dennis Emmanuel has been the subject of transfer tussle between top sides in the English Premier league. 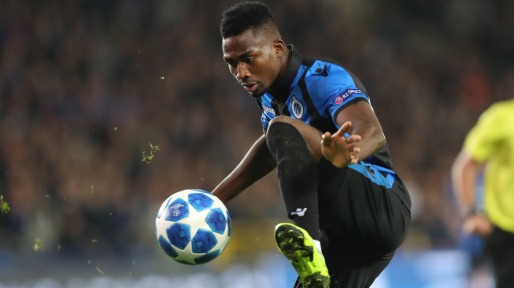 Manchester united wants the energetic forward as Romelu Lukaku replacement, but as to beat Arsenal and Leicester City to his signature.

Dennis great run of form with is Belgian side Club Brugge has seen him garner interest from English teams like Manchester United and Arsenal.

Manchester United have been linked with a transfer for the Nigerian forward in recent times, with report that the Manchester side and North London club (i.e. Arsenal) are favorite to sign the 22-years-old forward in January.

Manchester united are undoubtedly lacking depth in the goal scoring department, with the Ole Gunnar side depending solely on Marcus Rashford for the goals. Anthony Martial was expected to be the outright Centre forward after the disposal of Romelu Lukaku, but the French man has failed to turn up in most games.

Dennis has been on top form for is Belgian team “Club Brugge”, having scored 5 goals in 12 appearances. The 22-years-old has a lot of potential and should be of more use to Manchester United than Arsenal whose has good numbers of forward in their ranks.

Moreover, Leicester City are also reported to be interested in the Nigerian forward