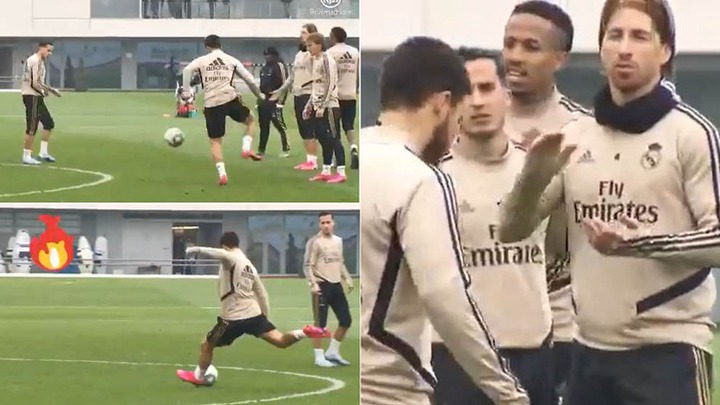 Eden Hazard showed that he is ready to return to action for Real Madrid after displaying his quality in Wednesday's training session with two wonderful goals.

In fact, Hazard's teammates were so impressed with the strikes that they ended up applauding him.

Real Madrid have been forced to live without their most expensive ever signing for much of his debut season in the Spanish capital, yet the Belgian is proving unstoppable in his pursuit of a return to competitive action.

Whilst the Champions League tie with Manchester City had originally been identified as a date for a return, Hazard has pushed the boundaries of the club's medical personnel and has appeared back in training far sooner than anyone expected.

He was desperate to be involved in the Madrid derby but it came too soon for him, especially with Zinedine Zidane known to be overly cautious over matters involving player fitness.

However, Sunday's home match against Celta Vigo could be the day the former Chelsea forward has been waiting for.

The one-time Lille prodigy trained in full contact with the rest of his teammates on Wednesday morning and there were no signs of any discomfort.

Wednesday was his eighth training session since returning to work, 82 days after he was injured by international teammate, Thomas Meunier, in the Champions League encounter with Paris Saint-Germain.