How Anthony Joshua Became Nigeria's Greatest Boxer Of All Time 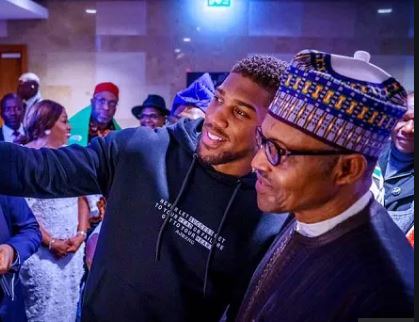 Anthony Joshua has come a long way to become one of Nigeria's most popular sportsman today and it has not been an easy journey for him.

The Nigerian professional boxer and current IBF heavyweight champion, Anthony Joshua was born as Anthony Oluwafemi Olaseni Joshua on 15 October 1989 to Nigerian parents in Watford, England. He began boxing at the age of 18-years and his cousin is fellow unbeaten professional boxer, Ben IIeyemi.

He won a gold medal in the super-heavyweight division at the 2012 Olympics, and silver at the 2011 World Championships. He is ranked as the world’s fifth best heavyweight boxer by The Ring magazine. There is no doubt that the charming 26-years-old professional boxer is definitely a name to be reckon with in the sports sphere both local and internationally.

His mother is Nigerian, while his father is of Nigerian and Irish ancestry. Joshua's Nigerian background can be specifically traced back to the Yoruba people, amongst whom he is of aristocratic rank.

He left Showtime in 2018 as part of an eight-year, $1 billion deal between his promoter, Matchroom Sports, and streaming service DAZN.

On Saturday December 7 the Nigerian-born British boxer Anthony Oluwafemi Olaseni Joshua ended major events of 2019 on a happy note for Nigeria when he became a two-time world heavyweight champion following his victory over the Mexican-American Andy Ruiz Jr in a tense rematch in Diriyah, Riyadh, Saudi Arabia.

This single win was one of the best highlight for Nigerians home and abroad as it was the biggest Nigerian sports event of 2019. He had lost the belt to Ruiz in June. He outclassed Ruiz to score a unanimous points victory to regain his IBF, WBA and WBO titles in emphatic fashion. He dominated the match from the onset.

Dubbed the “Clash on the Dunes”, the eagerly anticipated rematch marked the first time a world heavyweight title fight has ever been staged in Saudi Arabia. It was clearly a classic win.

The 2012 Olympic champion revealed he had adapted his style after June’s loss to Ruiz for the first time in his career. It was a moment of excitement for all Nigerians both at home and abroad with President Muhammadu Buhari leading the pack of notable figures who showered encomiums on the awesome pugilist. His both parents are from Ogun State, Southwest Nigeria. He visited Nigeria in July and spent weeks before returning to the UK.

Anthony Joshua recently met with Nigeria's President who was excited at how the boxer has been making Nigerians proud. They even took a selfie together, something that only one other person has been able to do.