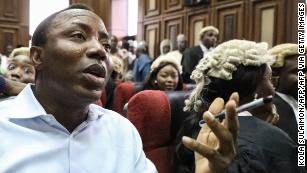 Lagos, Nigeria(CNN)The Nigerian government is facing immense criticism over the re-arrest and detention of investigative journalist and activist Omoyele Sowore on treason charges.

Sowore and activist Olawale Bakare were arrested by the Department of State Security Services(DSS) in August for organizing a nationwide protest against President Muhammadu Buhari's government.

The journalist, who has been charged with treasonable felony, was released a day before his court hearing last week. However, DSS officials stormed the court premises and re-arrested him, sparking nationwide outrage and international criticism against the government.

US Sen. Bob Menendez of New Jersey, where Sowore's family is based, said he was outraged by the "blatant harassment" of the journalist and authorities' disregard for court orders granting his release on bail.

"A Nigerian court has twice ordered his release on bail, and the state's security agencies openly defied the court order each time, leading me to conclude that either Nigeria no longer respects the rule of law or President Buhari is woefully out of touch with what his agents are doing in his name," the lawmaker said.

Presidential spokesman Garba Shehu said in a statement Sunday that the DSS does not need approval from the presidency to carry out its duties, which he said is backed by the country's laws.

Shehu said Sowore had publicly called for a "revolution" to overthrow Buhari's government and also founded an organization to cause unrest in the country.

"It should not surprise anyone who has followed his actions and words that Sowore is a person of interest to the DSS. No government will allow anybody to openly call for destabilization in the country and do nothing," Shehu said.

"Mr. Sowore is no ordinary citizen expressing his views freely on social media and the internet," he added.

"It's appalling that NJ journalist Omoyele Sowore was re-arrested in Nigeria hours after his release. This is a shocking affront to the country's rule of law, and Nigeria must cease its dangerous attacks on freedom of expression," Booker tweeted.

Nigeria's intelligence agency denied its operatives attempted to arrest the journalist inside the courtroom. According to DSS spokesman Peter Afunanya, chaos broke out after Sowore and his supporters saw the agency's officers waiting to take him into custody after his court hearing.

"Nigerians and the International Community should not be gullible or even vulnerable to the machinations of groups desirous of misleading them," Afunanya said in a statement.

On Monday, a group of human rights and democracy organizations issued a two-week deadline to the government to release the journalist on bail, investigate the court incident and free those alleged to have been detained by the agency illegally.

They are also asking Buhari to reassure citizens of his commitment to human rights and the rule of law in a public address.

"If these five demands are not honored within 14 days -- we call on patriots to join us as we occupy the National Human Rights Commission (NHRC) offices across the country, as it is legally mandated to protect rights and it reports to the Presidency," the group said in a statement.

CNN has reached out to a presidential spokesman for comment but did not immediately receive a response.

Sowore, an activist turned politician, ran against Buhari in the February elections and has often criticized government policies in the West Africa nation.

His case has been adjourned until February 11, according to his lawyer.