Manager assisted us to rob his bank - Armed robbers confess 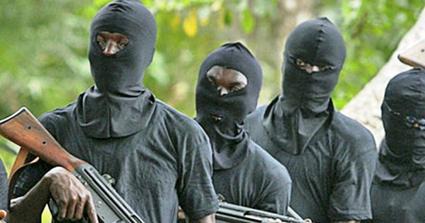 An armed robbery syndicate terrorising banks have disclosed how a Bank Manager connived with them to the rob his branch.

The suspects are: Mathew Olagoke, Ahmad Abdullahi, Johnson Ojo and Bamidele Adebanjo; who were arrested by the IGP Special Tactical Squad at Ibadan.

While parading the suspect at the police headquarters, Eleweran, Abeokuta, a member of the robbery syndicate, Adebanjo Bamidele explained that, they had concluded plans with the bank manager (name withheld) and six other staff of the bank who have agreed to cooperate with them upon their arrival at the bank.

Adebanjo, who refused to disclose the name of the bank, said the manager had assured them of a successful operation whenever they arrived the bank in Ekiti State.

The suspect, a private soldier who served with Nigerian Army, Monguno barracks, 242 Armoured Brigade, Maiduguri, said he was dismissed for being absent without permission.

He further disclosed that, the gang which specializes in robbing banks, filling stations, and University hostels had recently robbed University of Ibadan, Federal University of Technology (FUTA), Akure hostels among others.

Ebrimson noted that, the suspects phone conversation were monitored which aided the police team to swung into action and tracked them down to Ibadan, Oyo State where the robbers were intercepted and arrested.