Before our streets are taken over by beggars 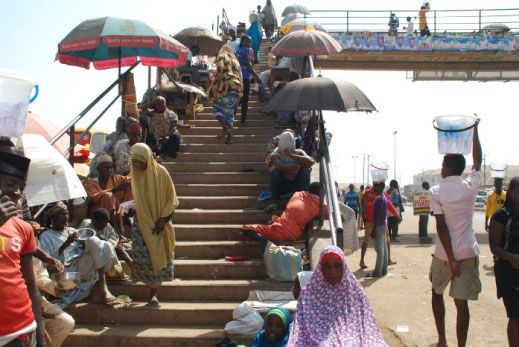 On a sweltering afternoon, I was sauntering through the Ojodu-Berger, a suburb of Lagos, Nigeria’s economic hub, for a scheduled meeting when I was halted by a modestly dressed young man, identified by Julius. His appearance easily paints a picture of “an office” worker—banker, corporate organisation staff among others.

However, with a depressed look etched on his face, there seemed a mismatch between his dressing and mission. I held my breath, waiting for Julius to make known his mission. Then he started, to my utmost, dismay: “Good afternoon sir, I came from Ibadan to Lagos for an interview. For now, I had no money on me to return home. You can help me with anything available. Nothing is too small here.”

While he was still talking, my attention was interrupted by those who have known Julius well, trying to gesticulate he was lying. Having spent some years in Lagos, it was not fully difficult to understand the picture of the whole situation at a glance. Julius is one of those “Corporate Beggars”—a group of people who dress in a corporate manner—on the streets with the aim of fleece unsuspecting members of the public of their hard-earned money with touching stories.

I didn’t exchange any word with Julius before I raced down the road to continue my journey and he was not bugged by my action either, knowing fully I understood his mission.

The short interaction led me into a deeper reflection on what has now become of our country. In a country so blessed with enormous human and mineral resources, while we should be in such a pitiable situation remains an incomprehensible puzzle.

Like Justice, many able-bodied men and women are now on the streets, cooking up unreal stories just to eke out a living. More worrisome, perhaps are the gory, gut-wrenching images and nauseating sights of people with different forms of ailments who have made the streets their second home. Ordinarily, these people should be in hospitals and other health institutions where they can be properly taken care of.

On the surface, such action could easily be branded as cheer laziness but when critically dissected, it is pretty much difficult to reach conclusion, given several factors likely to birth such situation.

With a population of over 200 million people, Nigeria remains the poverty capital of the world. The country’s surging population has continued to exert enormous pressure on available resources, birthing an atmosphere where only the fittest survives.

A look into the future gives no room for optimism either. By 2050, Nigeria is predicted to become the third most populated country in the world, overtaking the US. Unfortunately, government is doing little or nothing to educate its citizenry on the need for birth control, as way of checkmating the country’s spiraling population.

No doubt, if properly optimised, having a large population could be a form of strength, economically and security-wise. However, it becomes a huge problem when such large population is not properly managed as it ends up becoming a threat to the system, as we presently have in Nigeria.

The country’s unemployment rate is growing geometrically, while our higher institutions continue to produce graduates—mostly ill-equipped to provide solutions to the nation’s numerous problems—every year. Most of our school curriculums are out of touch with reality and instead of dissipating much energy into training job makers, we keep on graduating job seekers annually.

The country presently has over 16 million school-age children out of school, roaming the streets. In the Northern region of the country, there is increase in numbers of people hitting the camp of Internally Displaced Persons (IDPs) on a daily basis due to unchecked activities of Boko Haram insurgents and other forms of security threats.

It is only here in Nigeria where the leaders and the led think they can achieve meaningful development by mere wishful thinking and prayer, without any room for proper strategy for the future. The surge of beggars on the streets—created by systemic failure—portends enormous danger to the country’s security in the distant future. Aside their vulnerability to crimes, given the desperation to survive in such situation at all cost, there is the fear of them constituting further militia groups in the country.

The instance of Boko Haram recruiting children, largely uneducated and grooming them into deadly terrorists, is a glaring evidence. The widespread cases of kidnapping and abduction are also offshoot of the country’s systemic failure. It would therefore be suicidal to further give room for other militia groups, when our security agencies appeared clueless in tackling the spate of security presently in the country.

Government must rise up to the occasion and discourage people from taking to the streets to beg for alms by introducing various empowerment initiatives. That able-bodied men and women now also thronged the streets to solicit for alms shows our level of backwardness as a nation. There should be more empowerment of the people and a campaign aimed at ensuring individuals are meaningfully engaged.

Also, there is need to make our educational system skill-based. Such would further shrink the perennial dependence on government to create job opportunities. Our streets are gradually being overtaken by beggars, and if no drastic measure is being taken to arrest the trend, the country risks enduring another wave of security threat.

Time to arrest this ticking time bomb is now!