There are times when you fail to understand who is the real criminal when you get to hear of some complicated robbery cases.

The nation was left puzzled when the members of the Johannesburg Municipal Police Department shared a report of an incident which had taken place in the Gauteng Province.

Many were left having an understanding that even criminals are not safe from their peers as they do not have respect of anyone's standing in a society. A tweet which was shared by the JMPD highlighted that four suspects had been arrested by a team of dedicated police officers. Members who are deployed at the JMPD Region F2 carried out an operation which gave out solutions to problems which have been haunting our communities for too long.

It was stated in the tweet that the officers took down the suspects at Vickers Rd in City Deep next to Multi Flora. They were caught in possession of stolen property as well as drugs.

As the members carried out further investigations, it was established that the suspects stole the property in a housebreaking incident which they carried out in Rossettenville.

Among the goods which the suspects had were a microwave, TV, 8 cellphones, 2 pairs of sneakers and 16 packets of crystal meth. All the mentioned items were confiscated by the police.

The nation was left shell-shocked when members of the public learnt that the drugs which the suspects had were taken in the house robbery. This left many believing that the four robbers had robbed a drug dealer.

Currently the four robbers are in police custody and it is not yet known what action the police took on the suspected drug dealer who had been robbed. 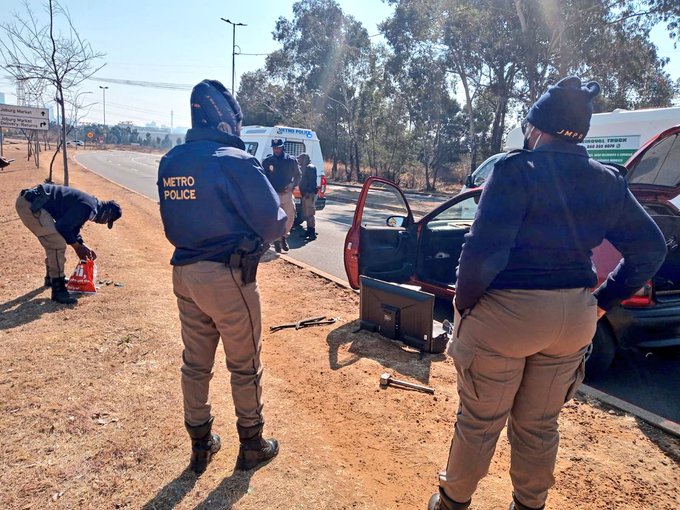 Drug dealing has been a case of great concern in the country as it has been affecting the peacefulness of our societies.

Crystal meth is among the banned substances which is abused by many in communities and it has so many negatives which it offers to the society. Robbers and those who engage in violent crimes often use it.

What however is more painful is that the crystal meth can have so many bad implications to ones health and it has led to many premature deaths in this country.

The big question which is on the lips of many is, "would you claim ownership of the drugs if you were the victim who got robbed?" Let us know your thoughts by leaving a comment.