The Simpsons' has been running for almost 30 years and has predicted most events which finds itself aligning with real life..

It was noted the parallels between Vice President Harris' inauguration outfit and Lisa Simpson from a 2000 episode. 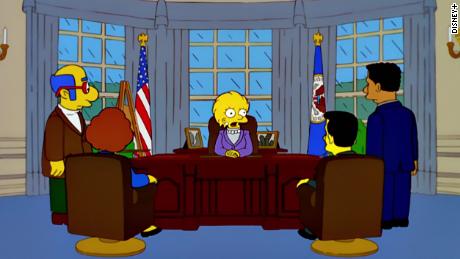 The similarities with the inauguration didn't stop there for Simpsons fans. This is not the only time The Simpsons predicted the future 1.19 years ago The Simpsons in their tv series predicted that Donald trump would one day be president of the United States ..

2.In the episode (Lisa's sax) ..The Simpsons predicted the outbreak of Ebola 17 years before it happened

3.In the Episode "When you dish up a star".This originally happened in 1998.This script predicted in 1998 being produced by 20th century Walt Disney Fox.On December 14, 2017,Disney purchased 21st Century Fox estimated 52.4 billion

4.In 2008 The Simpsons showed Homer trying to vote for Barack Obama in the US general election but a faulty machine changed his vote.Four years later, a voting machine in Pennsylvania had to be removed after it kept changing peoples vote for Barack Obama to ones for his republic rival Min Romney.

5.In 1994, Lunch lady Doris used assorted horse parts to make lunch for students.Nine years later,the food Safety Authority of Ireland found horse DNA in over one third of the beefburger samples from supermarkets.

Speculation over the show's prescient abilities is nothing new. Fans claim the show predicted , among other instances, the Siegfried and Roy tiger attack, smart watches,  and many more ...

The show's longevity and its exhausting of possible sitcom scenarios have even been referenced in other comedies, including the "South Park" episode, "The Simpsons Already Did It."etc..

t America back onto the global stage, but a whiplashed world