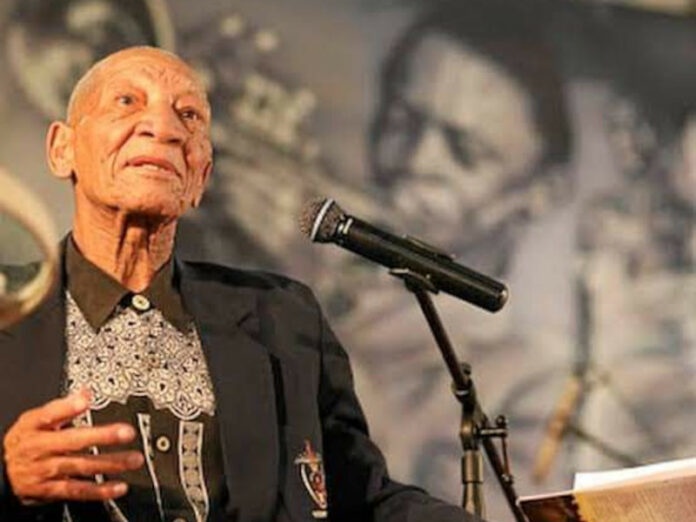 Omaruddin “Don” Mattera, a legendary poet, author, and anti-apartheid activist, has passed away at the age of 87.

The South African poet’s family announced his death on Monday afternoon and promised to release a detailed statement soon.

For his dedication to advancing human rights and fostering community growth, Mattera was recently recognised with the 2022 Artfluence Human Rights Award.

The poet was honoured on Saturday by the City of Johannesburg. Many people praised Mattera as a kind campaigner and someone who cared passionately about his community.

Born Donato Francisco Mattera, he grew up in Sophiatown before the apartheid government moved his family to Westbury, a predominately coloured area. As a teenager he was drawn to the gangs and led a notorious group called the Vultures. He was stabbed and shot and wound up in jail, awaiting trial for the murder of a member of a rival gang. Ultimately he was acquitted.

Meanwhile he was growing increasingly conscious of the political aspects of his existence and became caught up in the struggle against the expulsion of black, Coloured, and Indian residents from Sophiatown.

Now a political activist, he joined the ANC Youth League, then became very active in the black consciousness movement. His political work came to a temporary halt when he was banned in 1973. The apartheid government gave him permission to work as a sub-editor on The Star as long as he didn’t write headlines, for publications were not allowed to quote banned persons. The banning order was lifted nine years later.

Mattera was well-known for his poetry collected in several books, including Azanian Love Song.

He penned several books, including Gone With The Twilight. Plays and children’s stories are among his works.

His autobiography, Memory is the Weapon, received the Steve Biko Prize and other awards..

Mattera worked as a journalist for The Sunday Times, The Weekly Mail, now Mail & Guardian and The Sowetan. After his retirement, he spent most of his time writing and working with street children in Eldorado Park.

A well-known motivational speaker, he was frequently asked to serve as master of ceremony at various events. He was the proud owner of a University of Natal honorary Doctor of Literature (Dlit) degree. The US and Sweden both awarded him fellowships.

Mattera was set to be buried on Monday afternoon in accordance with Muslim rites.