Election2020: Meet The MP's That Have Retained Their Parliamentary Seat As voting has ended and counting is on-going, some polling stations have been able to collate their figures and this shown that 3 political ‘Gurus’ have retain their seat in parliament; Edwin Nii Lante Vanderpuye, Zenator Agyeman-Rawlings and Kennedy Agyapong. Another incumbent Member of Parliament, Dr Zanetor Rawlings for NDC in the Korle Klottey constituency, has retain her Parliamentary seat by ‘beating’ the NPP parliamentary candidate Prince Appiah in the 2020 elections. Dr. Zanetor Rawlings, who is the daughter of late former President Jerry John Rawlings won with 39,193 votes to retain her seat while her opponent Prince Appiah had 31,239. The incumbent Member of Parliament for Assin central Hon. Kennedy Agyapong has once again retain the seat. Kennedy won with 57.26% as against the Parliamentary Candidate of the NDC, Nurein Shaibu Miggyimah with 42.74% 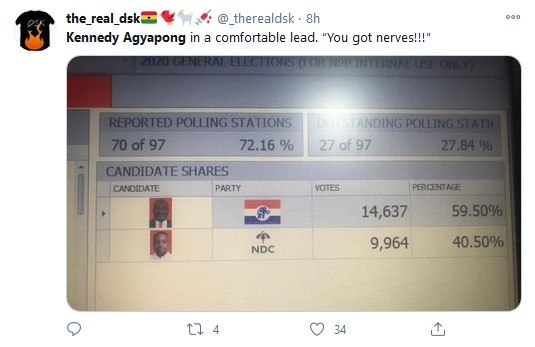