According to reports, all the plants were uprooted after being photographed by DCI Scenes of Crime personnel. The plants had a street value of about one million Kenya Shillings.

Officers searched the compound's two buildings thoroughly and discovered 21 bhang plants in the main bedroom, 68 in the sitting room, 14 in the dining room, 26 in an adjacent iron sheet walled house, and various personal documents. 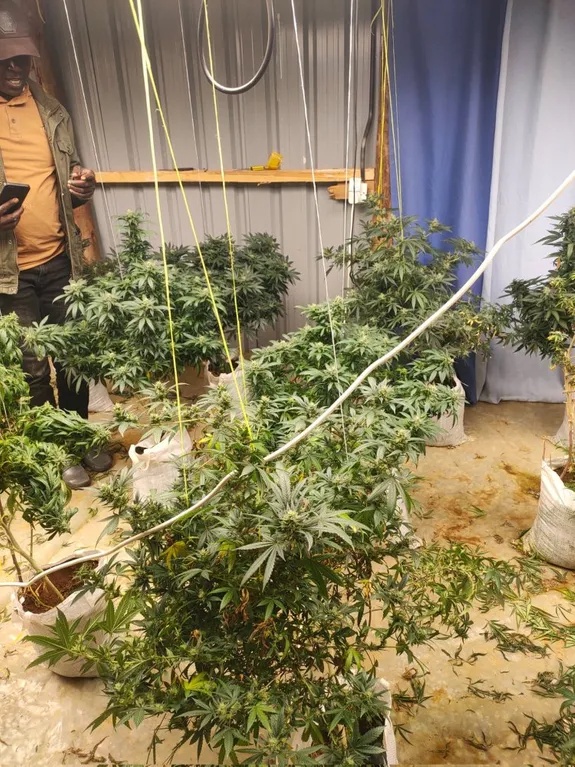 They have also asked the public for any information that could lead to the suspect's arrest.﻿

"We urge the public to desist from engaging in criminal activities," the police stated.﻿

According to Uasin Gishu Deputy County Commander Zachaus Ngeno, they recovered several documents from the house.﻿

A Kenya Certificate of Secondary Education (KCSE) certificate, a national identity card, a Moi University student clearance report dated 22/8/2020, and a payment slip are among them.﻿﻿

"We have identified the suspect but we didn't find anyone in the house during the raid," Ngeno stated.﻿

He added that the crop was in various stages and had been uprooted by police.﻿

According to a police statement, they received information about bhang cultivation at a residence in Elgon View Estate in Eldoret Town.﻿

A combined team of police officers, led by local chief Sammy Meli, raided the house on Tumaini Close on the outskirts of Eldoret Township.﻿

This comes as one of the Roots Party's presidential candidates, George Wajackoyah, continues to advocate for the legalization of marijuana cultivation.﻿

According to Wajackoyah, bhang cultivation has the potential to transform the country's economy.m.﻿