The police in Ejura have obtained an interlocutory injunction from Ejura District Court obstructing the commemoration and observation of Islamic prayers for persons who fell on June 29, 2022, during a protest against the murder of social activist Ibrahim Mohammed alias Kaaka.

Families of the fallen protesters- Abdul Nassir Yussif and Mutala Mohammed Siraji- as well as that of Kaaka, in collaboration with the Fixthecountry group, planned to hold the Dua’a’ prayer on Thursday, June 30, 2022.

But DSP Emmanuel Sarpong of the Ghana Police Service in Ejura went to court seeking an interlocutory injunction against the planned anniversary.

After hearing the applicant, the court presided over by His Worship Dennis Eyram Fumey granted the request of the police.

A certified order of the courts said, “it is hereby ordered that the respondent, their agent, assigns, or anybody claiming interest through them are restrained from organising or celebrating One Year Anniversary of Dua ‘a prayers for the victims of the Ejura incidents at Maame Dede junction (Ajaara Bode Park) or any other place within the Ejura-Sekyedumase Municipality”. 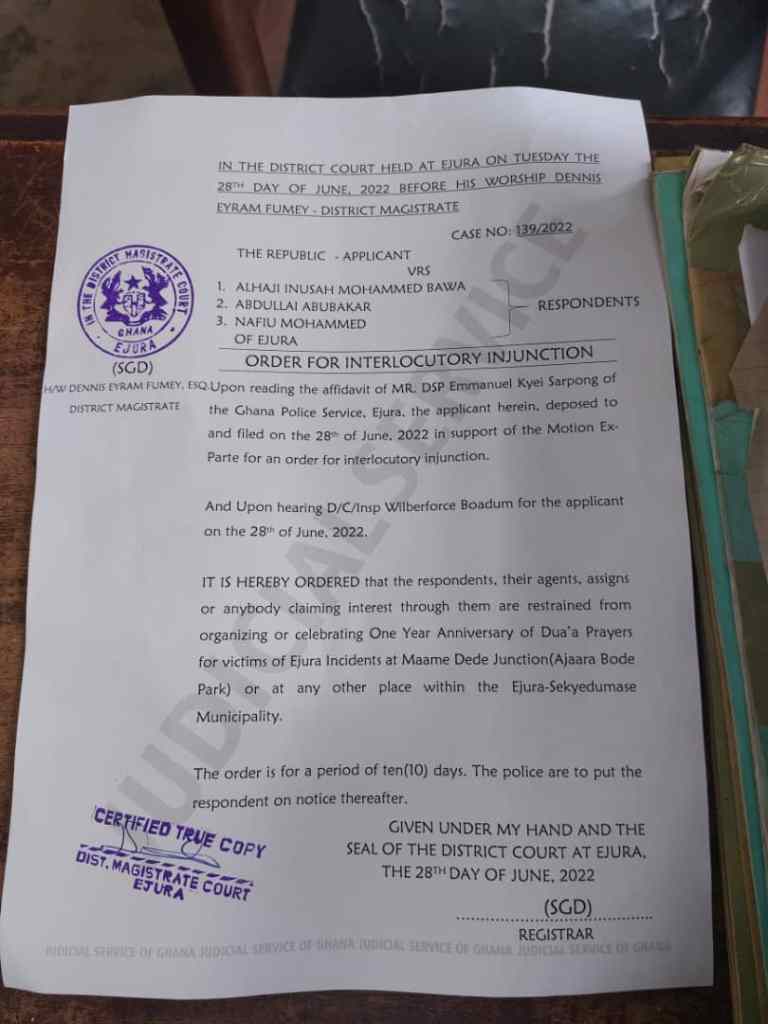 In reaction to this, families of the victims expressed shock at what they described as the use of the court to restrain their efforts at mourning their victims.

“We are shocked to find that our Courts are now being used to prevent us from mourning our dead relatives and performing the necessary customary and religious rites to observe their killing by the military. Nothing can fully describe the pain we feel in this moment. Our families are broken and devastated by this act of insensitivity and moral injustice”, the families said in a joint statement.

This comes days after the families wrote to the Municipal Chief of Ejura-Sekyedumase to maintain their stance in going ahead with the Dua’a prayers despite efforts by the Assembly to convince them to disembark on it during a meeting on Friday, June 24, 2022.

“Our families, having reached a decision that we are unable to cancel our event which is the expression of our religious duty to our departed family members, deem it important to restate the context of our event and its history. It is our hope that such context will help your management to better appreciate the importance of the event to our families and that this would help you know how to better support it to come off successfully”, the families said in a letter to the Ejura-Sekyedumase MCE on June 27, 2022.