Fast characters and comic books are like Formula One race cars and their engines…they are made for one another.

Due to the ever–changing landscape of fast characters, it’s been hard to keep track of exactly which are the fastest. I mean, which characters are actually the fastest in all of comics and which ones are only pretending to be?

So, to answer this question, I created a list for you. The list takes who I believe to be the five fastest characters from each of Marvel and DC and organizes them by pure speed. 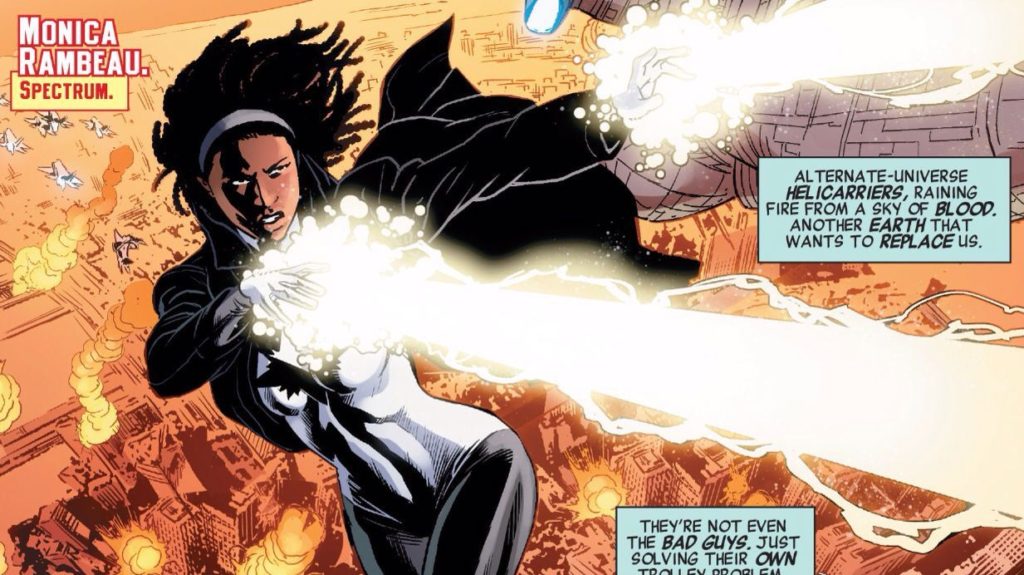 Even though she’s not a speedster in the traditional sense, Monica Rambeau’s inclusion as one of the fastest superheroes still makes sense.

As a hero, Spectrum has led the Avengers, been Captain Marvel, been apart of Nextwave, the Mighty Avengers, The Ultimates, and more. Her power to absorb energy enables her to travel at the speed of light and venture into the depths of space unharmed. For reference, even I, in my glory days of running, couldn’t muster up speed even close to that.

You may have noticed that she played a large role in 2019s Captain Marvel movie? Because she’s been used in so many different ways in comics, I suspect that her role in the MCU will continue to expand. 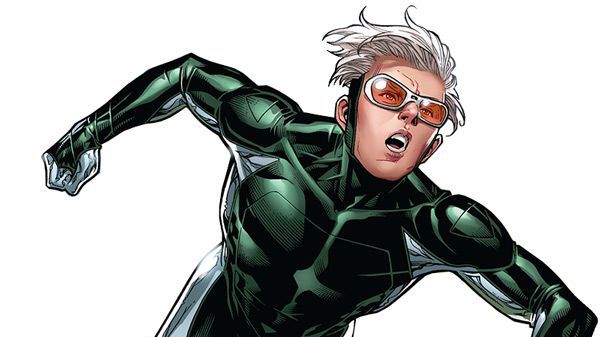 Speed first appeared in Young Avengers #10 and has since become a mainstay on the team. He is the brother to Wiccan and, although he’s no match for Quicksilver, he has achieved speeds faster than the speed of sound. That means that he has been able to travel over 1200 miles per hour.

What makes Speed such an interesting choice for this list is that he is so far away from his potential, he may one day becomes Marvel’s fastest superhero. 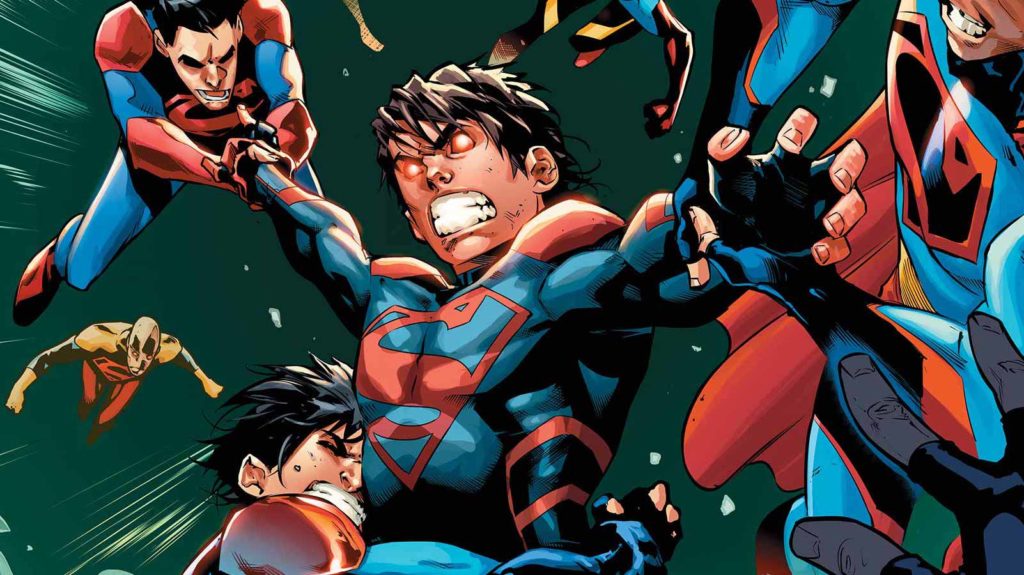 As an offshoot of both Krypton and Earth, Superboy has been gifted a set of powers that would make other superheroes drool. Because he is a clone of Superman, he doesn’t naturally possess all of Superman’s powers. Instead, he clones them.

Luckily, of the powers he does inherently possess, speed is one of them.

Superboy is so fast that, if running under Earth’s sun, he can move faster than the eye can see. As a result of his impressive speed, he and Bart Allen, like Superman and Barry Allen before them, have gone toe-to-toe in multiple races to see who is faster.

And just like Superman and Barry Allen, we’ve never really been given a definitive answer. 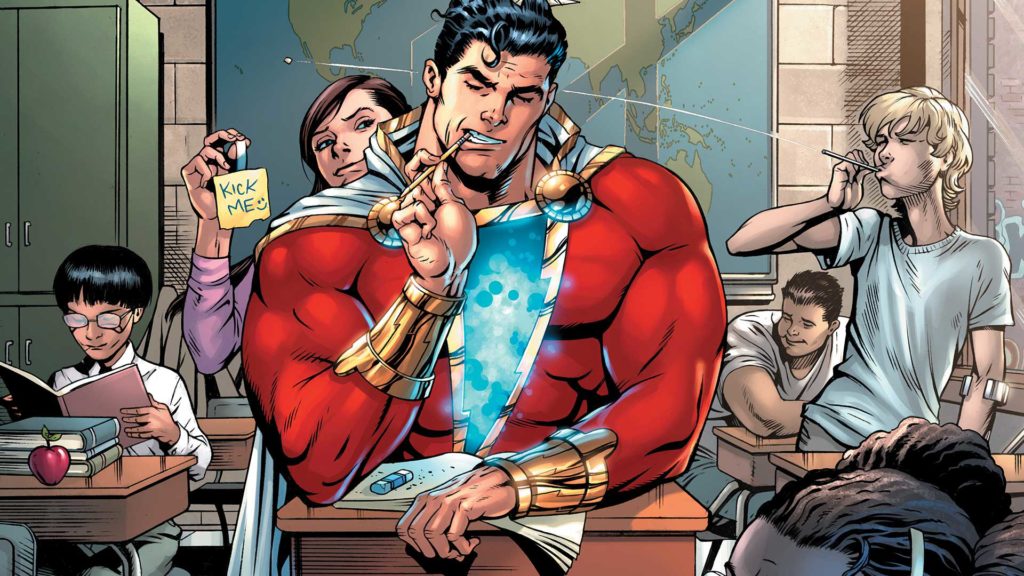 His story is well-known.

Billy Batson, a homeless boy looking for more out of life, follows a mysterious figure into a nearby subway station. As he arrives, he quickly notices a strange looking Subway car, and, along with the mysterious man, jumps in. The car takes the two to an old man who tells Billy that he is looking for a successor to bestow great power on. With Billy’s acceptance, he instructs him to utter the word Shazam.

As Shazam, Billy is granted a plethora of powers, of which includes superhuman speed. His speed allows him to travel at velocities similar to that of Barry Allen.

But that isn’t all.

Because his powers derive from so many Gods, Billy can also fly through the depths of space unharmed, and in early iterations of the character, could even fly faster than the speed of light. 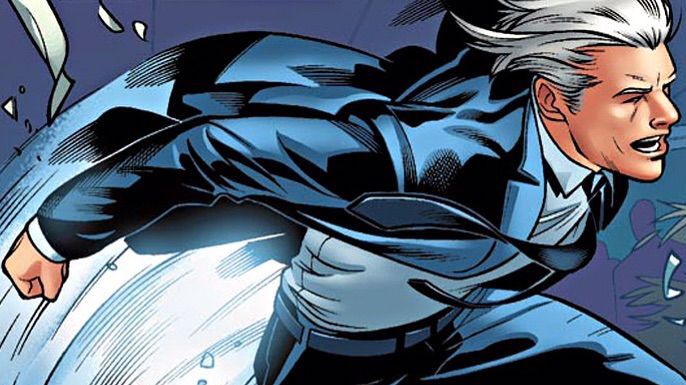 Quicksilver…the man many believe to be Marvel’s answer to DC’s The Flash.

Remembering back to when he first appeared in the Days of Future Past movie, it’s easy to see why they slowed down time around him. Can you imagine what it would look like if they hadn’t?

Instead of being the best scene in the movie, it would have looked like a blurry, blue poop streak on a child’s underwear. 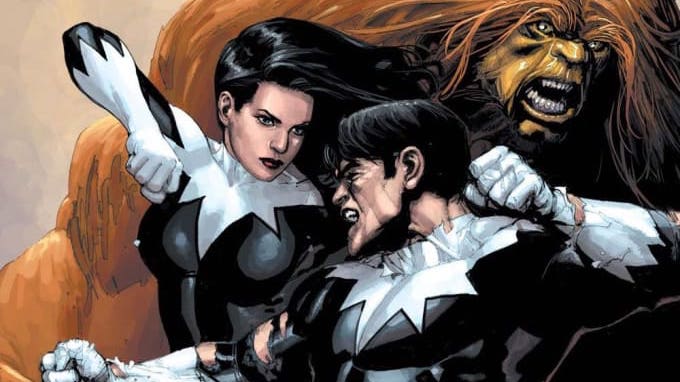 If the Alpha Flight twins inclusion here confuses you, let me explain why they’re here.

Separated at birth and reunited by Wolverine for the Alpha Flight team, Northstar and Aurora have an identical set of powers. Their powers grant them the ability to control the kinetic energy in their bodies, thereby allowing them incredible speed.

And what kind of speed are we talking about?

Together, the twins are capable of moving at light speed. Yeah, light speed. I will, however, mention one important thing. Neither has mastered exactly how to control the effect that light speed has on their bodies so they don’t do it too often.

Superman is absolute perfection in the superhero realm. He has every known power in existence. He can do anything the writers need him to do. And he has single-handily saved the Earth more times than can be counted.

My reservations aside, he still deserves to be considered one of the fastest superheroes. And here’s why.

Superman is so fast that he and The Flash have had multiple races to see which of the two is the fastest. That’s right. He and the fastest man alive compete to see who is actually faster. Makkari is an Eternal who possesses incredible speed. As such, he is the fastest of all the Eternals. As an Eternal, he is telepathic, incredibly strong, near-immortal, can fly, and project energy. What makes Makkari unique as an Eternal is his obsession with speed. Makkari is so obsessed that he has drained his other abilities and channeled them into his speed.

Already the fastest of the Eternals, Makkari, with his other abilities drained, has become one of the fastest beings in all of Marvel. Unfortunately, his obsession has come with a cost. Because he’s drained his other abilities, he isn’t as strong as other Eternals and his body can become fatigued to the point of sickness. 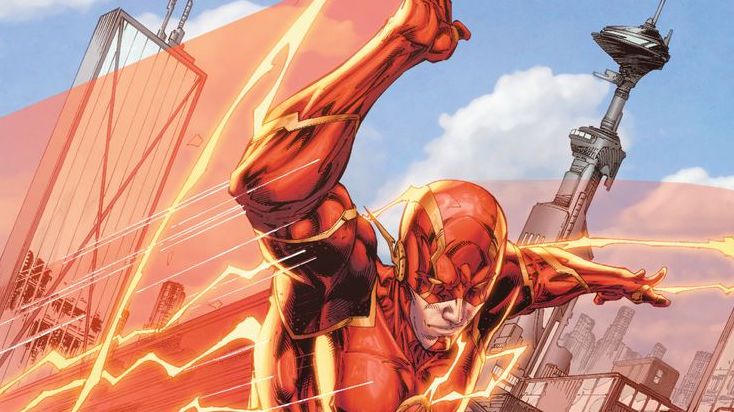 Most don’t even need to be a fan of comics to have heard the name The Flash before. Barry Allen is the quintessential speedster and has personified what it means to live life in the fast lane since his debut. While not the first Flash character, Barry Allen is the most important.

Throughout his history, he has sacrificed everything for the greater good, lost love, and done so because that’s what heroes do. Barry Allen is everything the Flash stands for because, well, he wrote the book on what it means to be the Flash.

For as long as Wally West has existed there has been the debate as to whether or not he is faster than Barry Allen. Recently DC released a chart depicting, in order of slowest to fastest, their fastest characters. And with that chart, the world had its answer.

Of all the characters in DC, Wally West is the fastest superhero they have. And why? Because, while others use the Speed Force, Wally has become one with it. To put it into perspective, Wally West is so fast that he has covered over 7,000 miles in just under 7 seconds. If ever you though that Barry Allen was the fastest Flash, consider yourself educated.

And I’m gonna wrap it up here. The Top 10 Fastest Superheroes In All Of Comics. What do you think? Who would make your fastest superheroes list?