RAMADAN: Can i brush my teeth in the morning while fasting? 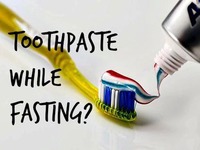 One of the most frequent questions during Ramadan is always “Can I brush my teeth in the morning if I eventually forget during sahur?”

Yes, you can brush your teeth during the day while fasting, it is Halal (permissible) but Makruh (discouraged)

It is permissible to brush one’s teeth in the morning with toothpaste while fasting as long one takes care not to swallow the paste.

Using a brush while one is fasting is not blameworthy, provided that no toothpaste or similar substances reach the stomach. If anything reaches the stomach, it breaks one’s fast according to the majority of Muslim jurists.

It was reported in the traditions that the Prophet (peace and blessings be upon him) was seen brushing his teeth quite a number of times during the day while he was fasting and also commanded his companions to use siwak (chewing stick) in cleaning their teeth and while fasting.

“I have seen the Messenger of Allah (peace and blessings be upon him) using a tooth-stick (siwak) while he was fasting more often than I could count.” (Abu daawud and at-Tirmidhi)

Sheikh Ibn Baaz (May Allah have mercy upon him) when asked about this matter, He said:

“Theres nothing wrong with that so long as one is careful to avoid swallowing any of it, just as it is prescribed in Islam for the fasting person to use the siwak (Tooth-stick)” (Fataawah al-shaykh ibn baaz, 4/247)

“It is permitted but preferable not use them because the toothpaste is strong and MAY go down into the throat. Instead of doing that during the day, one should do it at night”. (Sharh al-Mumti ibn Uthaymeen, 6/407, 408)

The toothpaste is clearly not intended for consumption. Fast is only broken when it goes directly into our system. IT IS THEREFORE MUCH RECOMMENDED TO USE SMALL QUANTITY OF THE PASTE to brush when fasting but to say one cannot use toothpaste is nothing but rigidity.

It is far more important for us to avoid such objectionable things than being rigid on such frivolous interpretations which have no valid ground in Islam.

A better alternative to using toothpaste while fasting would be the usage of the siwak (chewing stick), (which is far more better to using toothpaste) to clean ones teeth and freshen ones breath, as was the preferred Sunnah of the Messenger of Allah (saws). Narrated by Abu Huraira, that The Prophet (saws) said; “But for my fear that it would be hard for my followers, I would have ordered them to clean their teeth with Siwak on every performance of ablution.” The Prophet (saws) did not differentiate between a fasting and a non-fasting person in this respect (using Siwak). (Sahih Bukhari 3:154)

Aisha (May Allah be pleased with her) said, "The Prophet (saws) said, 'It (i.e. Siwak) is a purification for the mouth and it is a way of seeking Allah's pleasure.

Why is it makruh (discouraged)?

It is discouraged to brush one’s teeth while fasting (but not haram).

Abu Huraira (r.a) was reported to have said that the prophet (peace be upon him) said “….., verily, the smell of the mouth of a fasting person is better to Allah than the smell of musk” (al-Bukhari 77/142)

What happens when you mistakenly swallow it?

If one is cautious and brushes his teeth and out of forgetfulness some traces reach his stomach, he is not sinful, as Allah forgives the mistakes of Muslims that are made unintentionally “and there is no sin for you in the mistakes that ye make unintentionally.”(Al-Ahzab 33: 5)

The Prophet (peace and blessings be upon him) is reported to have said: “My nation shall not be held accountable for the mistakes they do unintentionally, out of forgetfulness, and under duress.”( Ibn Majjah)

Whatever written of truth and benefit is only due to Allah’s assistance and guidance and whatever of error is of me alone.