A young but talented boy from Enugu state has constructed an aeroplane with the help of locally sourced materials.

Although the mini airplane has no engine, it looks like a real jet and even can contain two or three passengers.

See some photos of the amazing plane below: 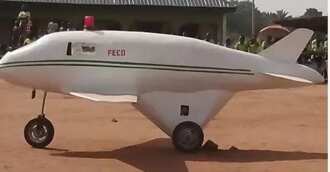 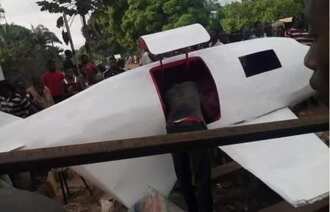 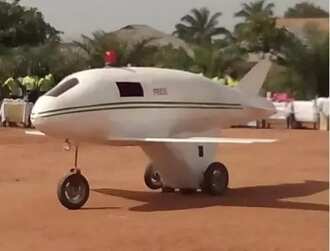 However, while some people really admire such young talents, others express scepticism.

"Na wao... Can it fly? Cos aeroplane flies. Not putting metal together and giving it a shape of an aeroplane then bringing it to public viewing..When will Nigeria stop feeding on carcass of western worlds? Still kudos to the boy," Amdoyin wrote.

"Great! Keep it up boy! If our country wants a future,they should pick boys like this and develop them immediately by sending them to abroad for further studies. This guy can begin building planes in the future for Nigerian Air plane Manufacturing Company N.A.M.C. I just coined that one!" Ideyontop noted.

"High time all these things are discouraged. No matter how hard they try, the art of aircraft manufacturing is not a one man thing, it requires high tech brains."

"Maybe to join a toy-making company because that's what I can see there. So many unknown people make toy cars, toy guns etc, so I don't think this should be news. It's not all about putting metals together and producing another toy; it's about making something functional," Jesumed wrote.

Two months ago, a group of students from the University of Lagos showed their talents and constructed an eco-friendly car.

According to the students, the car does not diffuse gas and does not make use of fossil fuel. The car made of locally sourced materials was built under the Project Dove Initiative.

Earlier this year, Ufot Ekong broke a 50 year record in Japan after graduating with a first class degree and best overall student from Tokai University in Tokyo.

Asides from studying hard, Ufot works at Nissan, where he has already made two patented products. Recently, he has developed an electric car that could go as fast as 128 kilometers per hour.