Witch Doctor : The Brain Behind Yahoo Plus 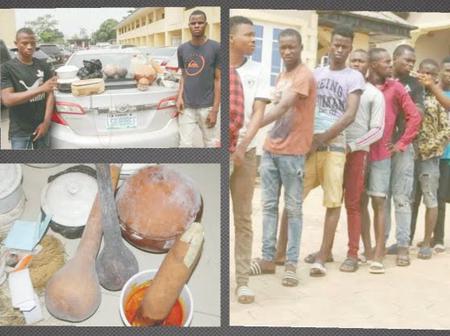 However, a witch doctor, simply identified as Oluwo, who was arrested by operatives of the Anti-kidnapping Squad at Igbile in Ogun State, has confessed how he even killed newly born babies as part of the ingredients for preparing the concoction with which he had been assisting Yahoo boys to perpetrate cybercrime.

Our correspondent gathered that after Oluwo’s arrest, he allegedly told the police during interrogation that the killing of new-born babies made the concoction more potent and guaranteed success for the Yahoo boys in their dealings with their victims, particularly the foreigners.

Oluwo was allegedly arrested in the Itokin area of Lagos State while driving in a Prado jeep with a suspected Yahoo boy. The police were said to have found inside the vehicle a new-born baby wrapped in a piece of white cloth and placed inside a mortar.

The suspected yahoo boy in company with Oluwo was said to have immediately fled the scene as the police stopped their vehicle. But Oluwo was not that lucky as he was arrested as he, too, made an attempt to take to his heels.

A police source told our correspondent, “When he was beaten thoroughly, he confessed that he was working for Yahoo boys. He said they were about to use the new-born baby for a ritual in a river. He said after the burning of some parts of the baby’s body along with some materials, they would use the concoction obtained from it to make incisions on the Yahoo boy’s wrist and face before he would proceed to give orders to his victims on the internet.

The police source also disclosed to our correspondent that after his arrest, Oluwo offered the team the sum of N500,000 bribe, which they rejected.

“He offered us N500, 000 to release him, but we declined and sent him to our headquarters along with the baby and the jeep.”