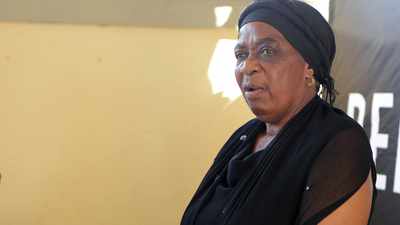 ALTHOUGH it has been years since the death of the former Bafana Bafana and Orlando Pirates goalkeeper, his mother says she is still waiting for Kelly Khumalo's mother to mourn her son's death.

Ms Ntombifuthi Meyiwa, in an exclusive interview with Phumlani Dube on YouTube, reveals that she still has a bleeding wound from what happened to her son, and that her in-laws did not come to mourn the death. Meyiwa, who did not want to be named, said they welcomed the family of Senzo's mother (Kelly Khumalo) but did not show any sympathy for them as the incident happened together

" Nobody came home even though we welcomed them with a baby. Not that we welcomed them because we loved them but Senzo wanted us to see if the baby really belonged to him. "She is a housewife and she will not come to mourn with us. If she was scared she would ask the police to accompany her," said Meyiwa.

SHe went on to say that Senzo's child, they did not deny and she admits that she looks exactly like her grandmother. The family said there were some traditional things that were already done for the child but they did not bring them to bury their father.

In the interview, Senzo's mother also lamented the poverty of the family, and asked anyone in South Africa who could help them.

SHe expressed her displeasure with the football officials who did not appear even in Senzo's case.

“Even his friends who lived with him in the house, when we asked them for help, they just ran away. It seems that someone issued an order not to talk to the Meyiwa people at all. What confuses him is that Senzo was lending money to a lot of his friends, who also don't care about us, ”said Senzo's mother.

Concluding, Meyiwa said Ace Ngcobo was helping her, Zwi Lomzansi FM community member Vela Xulu, and broadcaster Maswidi Xaba had bought her a chicken coop and chicks so she could earn a living. SHe said the pension, although she earns it, ends up in her hands.

She emphasized that the letter was not a signal of a formal antitrust inquiry into South Africa.