Henry Mwani, 35, staged a mock burial service for his daughter in April. The primary school teacher had reached out to his estranged wife to inquire about their daughter's well-being. Her words were heartbreaking. She informed him that their daughter had died and was buried in Nairobi's Lang'ata Cemetery. According to Luhya traditions, when a person dies but their body is not found, as in some cases of drowning, a mock burial ceremony must be performed to placate the spirit of the deceased. A cemetery is excavated and a banana is planted for adults. Shikhongo (wooden pegs) are driven into the four corners of a symbolic tomb for minors. By the gravesite, a chicken is also slaughtered and eaten.

Mwani, on the other hand, ran into an old friend in Kakamega town last week. Mwani was given another shock after the usual pleasantries. His daughter was still alive and well, according to his acquaintance.Mwani couldn't fathom why his ex-wife would fabricate such a heartbreaking lie.“I got married to the lady in 2014 and the following year, on December 1, we got a daughter. I came back from work in the evening to find my wife had packed her belongings, locked the house, and left the key with a neighbour. I was dumbfounded because we had been on good terms. I could not think of any reason that had made her leave so suddenly,” said Mwani 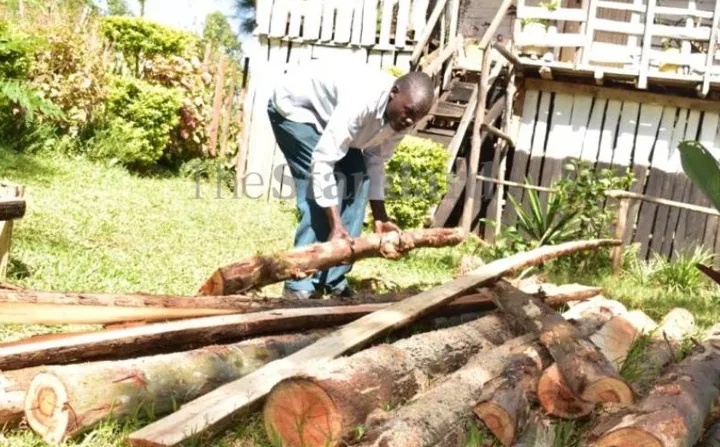 Mwani inquired as to why he had not been informed of his daughter's death for a year and why she was buried in Nairobi rather than her father's compound, as is customary. John Mukhweso, Mwani’s brother said: “Custom demanded that we travel to Nairobi if only to scoop some soil from the girl’s grave and symbolically bring her back home, but our in-laws declined to take us where they had claimed to have buried her.” Mwani had to double-check when he was told the girl was a student at a school in Kakamega town.

“I did not believe it at first, so I went to the school. After narrating my story to the headteacher and being allowed to see her for myself, I confirmed that my daughter is indeed alive. I was elated just seeing her.” On visiting thew school, the Director confirmed that indeed the girl is one of their best pupils.

Mwani's father now want a cleansing ceremony quickly conducted as he says that they had already conducted a 'burial' for the girl. He says that if the ceremony was not conducted, the girl might face misfortunes for the rest of her life.