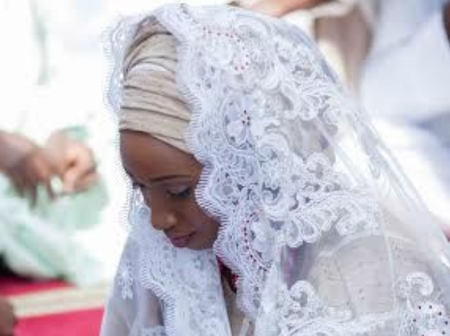 According to witness, Aishat Busari, A Muslim lady rejected the Dowry (Bride price), then tell her husband to promise her not to marry another wife in present of all the family during wedding in Offa, Kwara State .

This happened in Amuyo Area Offa, Kwara State, a lady called Fatima Babawale rejected the Dowry on 15/2/2020 during their Nikkah and requested for promise.

In Islamic Religion, is not mandatory to give the woman Bride price as money, Bride price can be in different form, for example, it can be Money, Cloth,Shoe, or any tangible thing that came from bride mind.

During Muhammed Adebayo and Fatima Babawale's on Saturday 15th 2020, Alfa ask Muhammed to come out and pay his wife bride price and also the Imam ask him the kind of bride price he want to pay, Muhammed was about to drop money while Fatma stand up and tell Muhammed not to pay money, one of the Alfa ask Fatima what she want and she said Muhammed should promise her that he will not Marry another woman in present of all the family, Muhammed was surprised at first, because she has not discuss it with him before the Nikkah.

Mohammed went to his dad and mum to discuss with them in short minutes, they concluded that he should do what his wife requested.

He now take the Microphone and promised her, and they concluded the Nikkah.

If this situation is you, what will you do?