It is indeed ironic how life changes, one-minute people are chanting your praise and the very next minute they are singing your destruction. This is exactly what happened today as President Muhammadu Buhari paid a visit to Maiduguri Borno states capital today.

The very place which use to be a stronghold of the President today became a complete opposite. During Buhari’s previous visits residents would line up on the streets chanting “Sai Baba” but today the chants we’re different. As the convoy of the President made its way, residents lined up and we’re chanting “Bama So!” “ Bamayi” that’s Hausa language which when translated means “We don’t want; we are not interested” 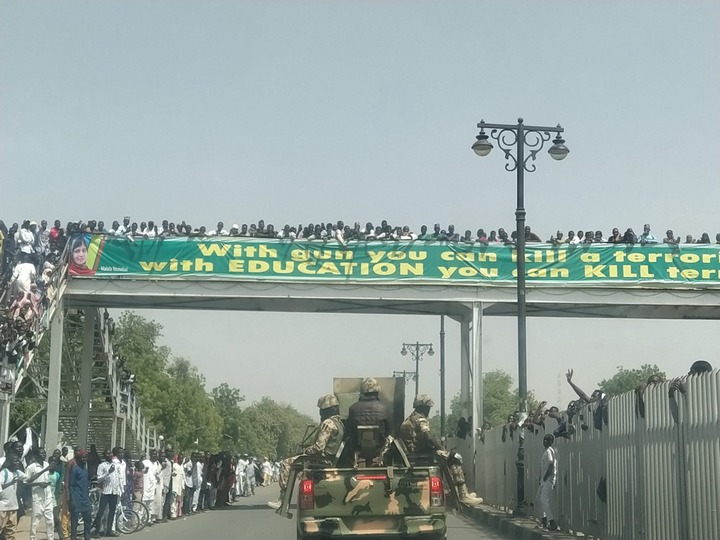 Apparently, a lot of Nigerians are not happy with the federal government's decision to free the 1,400 Boko Haram insurgents that were released. I also expressed my displeasure in my previous article but what can we really do about it? Nothing I guess. But that is not the case with some residents of Maiduguri.

So I just watched a video on Instagram posted by Former aide of ex-president Goodluck Jonathan, Reno Omokriwhere residents of Maiduguri were chanting in anger “we don’t want” in the Hausa language at President Muhammadu Buhari’s convoy as they drove past. The angry residents stood by the roadside and on the pedestrian bridge as the president's convoy drove by. President Muhammadu Buhari paid a sympathy visit to Maiduguri today in respect of the killings that took place on Sunday night in the state. The President landed Maiduguri from Ethiopia where he attended the 33rd AU summit on Monday.

Rather than welcome, the President's visit, the reverse was the case as many residents chanted their displeasure at the release of the 1,400 Boko Haram insurgents. Well, I do not know what reception the president expected to receive but this does not come as a surprise at all following what they just experienced.

Maiduguri experienced a tragic loss on Sunday as Boko Haram attacked, burnt about 30 persons to death, also burnt about 18 vehicles and kidnapped a number of people who are yet to be accounted for. So you see why the anger is still very fresh in the minds of the residents of Maiduguri.

When the incident happened, some people blamed the soldiers for the deaths of the victims because the gate into the city was locked which made them vulnerable to attack from Boko Haram. The gate was mounted to curb the incessant attacks from Boko haram.

The Soldiers always locked the gate by 6 pm which was the curfew time and opened it at 6 am the next day. But on this faithful Sunday, travelers who were unable to beat the curfew ended up sleeping outside the gate and we’re attacked by Boko Haram. One of the victims who were burnt to death was identified as a student of mass communication with the University of Maiduguri.

The pain is still fresh in the heart of the residents of Maiduguri which is why they did not waste any time to express how they feel when the president visited. As frankly speaking I do not blame them because they lost wives, husbands, children, loved ones and even vehicles just a few days ago.